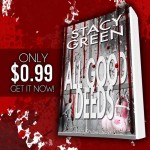 Haven’t read ALL GOOD DEEDS, the first book in the Lucy Kendall dark psychological thriller series? Now’s your chance to get it for just 99 pennies! Call it dark justice, not murder. Because Lucy Kendall is not a serial killer. She simply takes out the trash and brings justice to the innocent. 2015 Independent Publisher … Read the rest →
1 comment 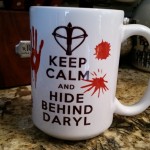 Seriously. I’d be on their top wanted list in minutes, as would many writers. I kill and sometimes torture people for a living, so a girl’s got to do her research. Details matter, because readers are smart. My 10 Best (or Worst?) Search Terms How to kill with cyanid How does a body decompose in … Read the rest →
2 comments

|   Stacy
Yeah, so I am massively behind on my TBR list. Story of my life. But I’m prioritizing, and I thought I’d share my current top 5. The Last Child by John Hart. I started this book several weeks ago when we were at a swim meet. It’s very good, but I got away from it … Read the rest →
1 comment 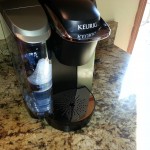 So I’m a newer coffee drinker. I’ve only started in the past two years, but I’ve quickly discovered the joys of espresso. There’s a great drive through coffee place (not Starbucks!) about 5 minutes away where I have been getting my fix. Still, driving over is a PITA, so I’ve been toying with buying an … Read the rest →
5 comments 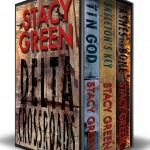 Happy Spring! I’m saying that because warmer weather is finally here, and I don’t care if it’s cloudy and the yards are mucky. We’re not freezing any more! Now, on to business. In the next week, I’ll be releasing a box set of the Delta Crossroads Trilogy. It’s an awesome collector’s item, and today I’m … Read the rest →
15 comments
⇧