Guest Author Jenny Milchman: Why I Decided To Do A 7-month Book Tour →

Last month, I announce I’d received the rights back to my debut novel, Into the Dark and would be republishing it as INTO THE DEVIL’S UNDERGROUND. The book was originally written in 2011, and my writing and storytelling ability has improved considerably. I’ve also got an amazing new editor, Annetta Ribken, and I really wanted to see what she could do with the novel.

She tore that sucker to shreds. 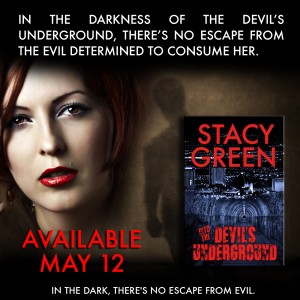 If I never hear the words “dialogue tags, woman,” again, it won’t be soon enough. And I know I will, because that is a tic I’m working on. Anyway, plot holes had spotlights pointed on them, and character development became a major issue.

Getting back into the heads of characters I hadn’t spoken to in three years was tough, and the editing grueling, but I am so proud of the finished product. Scenes were slashed and burned, new words were added. The bad guy’s motivation was strengthened, and that one little mistake Emilie makes at the end of the book that made her such a dumb female? Fixed.

More importantly, Emilie and Nathan’s relationship was developed much earlier on. I won’t give too much away, but I will say Nathan is inside the bank with her during the hostage siege.

Roughly 12,000 words were cut and about 10,000 new added. Everything about the book is better, and I’m very proud of the end result.

And while some readers may not want to read the new version (which I do understand) I am a much better writer after the hellish edits of this book. That alone is worth the effort.

If you are interested in checking out INTO THE DEVIL’S UNDERGROUND, you can find the buy links here.

And don’t miss the release party on Facebook on Thursday, May 14. We’re giving away a very cool limited edition prize!

Guest Author Jenny Milchman: Why I Decided To Do A 7-month Book Tour →