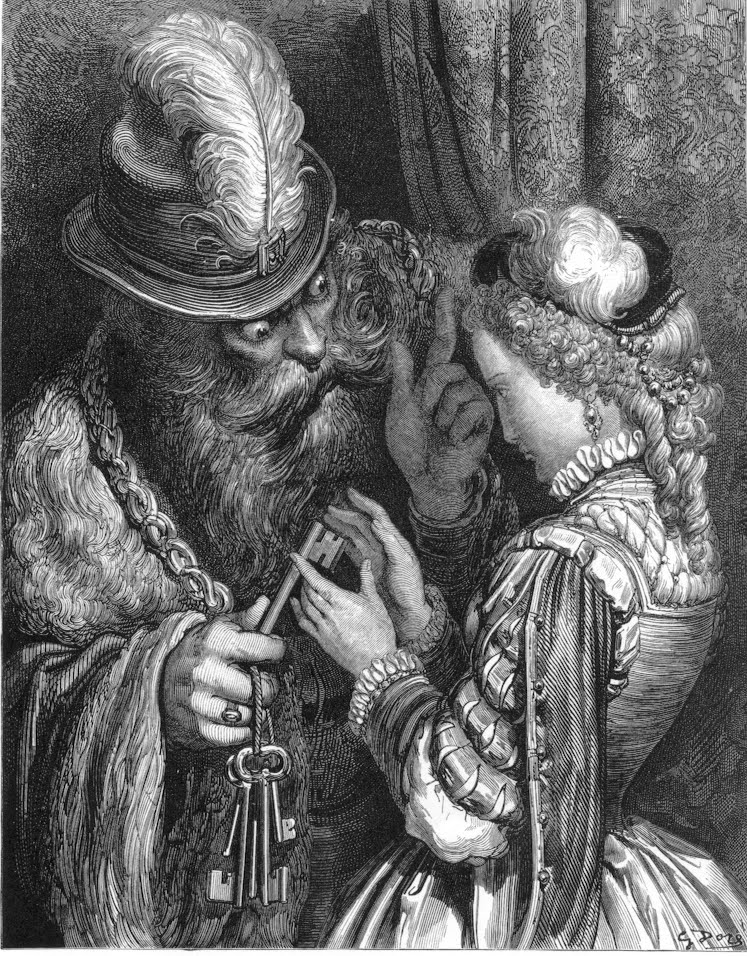 Old fairy tales are scary as hell. In The Legend of Bluebeard (“La Barbe bleue”, Tales of Mother Goose, Charles Perrault, 1697), a hideous man with a strange blue beard and a wealthy estate is known to have had several wives who disappeared. His new wife is soon left alone on the estate, and he hands her a set of keys. She may open any room she wishes, except for the small closet at the end of the basement. Naturally, as soon as he was gone, the wife rushed to the basement closest, only to find the seven previous wives of Bluebeard, their throats slashed from ear to ear. Bluebeard discovers her treachery and vows her to death, but her brothers arrived to save her. The wife inherited his fortune, and she and her family lived happily ever after.

A children’s fairytale, meant to teach God only knows what, but in the early 1900s, one of the world’s first lonely hearts predators killed ten women, earning the chilling nickname Bluebeard.

Short and bald, with bushy eyebrows to match his equally overgrown beard, Henri Landru wasn’t exactly an Adonis. By looks alone, he wasn’t the type of man you’d expect to woo hundreds of women, let alone bilk them out of their lives savings. And yet he did. A second-hand furniture dealer and automobile mechanic, something about Landru lured women by the hundreds.

He killed ten of them.

Born in 1869 to an average family, Landru’s childhood was uneventful. His mother was a housewife, his father a fireman at Paris’ Vulcain Ironworks. Landru attended Catholic school and was drafted to the French Army at the age of 18. In 1891, he managed to seduce his cousin, who bore him a daughter. He married another woman two years later, quit the military, and began working as a clerk.

Unfortunately, his employer swindled Landru out of a large sum of money. This turned Landru to a life of crime and revenge. Many of his victims were windows he’d meet through his legitimate furniture business. Lonely and faced with poverty, these widows made easy targets.

Between 1900 and 1908, Landru served several stints in prison. He was released in 1908 with the understanding he would re-enlist in the French Army. Instead, he honed his skills and continued to prey on vulnerable women.

His first known murder victim is Madame Cuchet, a 39-year-old widow. She was nearly destitute when Landru swept in to save the day. Cuchet’s brother was suspicious of Landru, but she ignored his warning. She and Landru moved to a villa in Vernouillet with her son. Mother and son were last seen alive in 1915. Landru’s wife was later presented with Cuchet’s watch as a present.

Next was an Argentine widow named Madame Laborde-Line. She told friends she was marrying an engineer from Brazil, but the two decided to move in together. Laborde-Line was last seen in July 1915.

Then came Madame Guillen, a 51-year-old widow, followed by Madame Heon. Both visited Landru’s villa in Vernouillet and disappeared.

Andree Babelay, a servant girl, also disappeared. No one knows why Landru chose to kill her–she certainly had no money to offer.

Landru eventually left Vernouillet for a new home in Gambais, where he had a large cast-iron oven installed.

His first known Gambais victim was Madam Buisson. It took Landru almost a year to estrange the wealthy widow from her family. She was last seen in 1917.

For years, Landru wasn’t suspected in these women’s disappearances. He worked hard to separate his victims from their families, but then worked even harder to make the families believe their loved ones were alive long after he’d killed them. He sent postcards, forged letters, pretended to be an attorney–the list goes on.

Remember the first Gambias victim, Madame Buisson? Two years after she’d disappeared with Landru, her son passed away. Her sister began searching for the woman, finally writing to the mayor of Gambais. She told the mayor her sister’s intention had been to run away with a man named Guilett (Landru’s alias). The mayor suggested she meet with the family of Madame Collumb, who had also vanished under similar circumstances in 1917.

Landru’s aliases were soon discovered and searched for, but his known residence at Gambais was empty. Buisson’s sister refused to give up. She remembered what her sister’s lover had looked like, and in 1919, spotted Landru strolling out of shop. She lost him in the crowd, but the owner of the shop told her the man’s name was Guilett, and that he lived in the Rue de Rochechouart with his mistress. Landru was soon arrested.

They didn’t have much to hold him on. Police searched the homes and gardens in Gambais and Vernouillet but only found a memo book where Landru recorded his financial status. Landru believed he was in the catbird’s seat and kept quiet. Authorities spent two years investigating, eventually discovering that all the women in Landru’s notebook, whom he’d med through marriage advertisements, had disappeared. He’d also recorded one-way trips from Paris for each victim, but round-trips for himself.

Still, no bodies. The gardens at both his residences were repeatedly dug up. The break came when neighbors at Gambais mentioned noxious fumes coming from the kitchen. Police searched the iron stove and found bones, as well as women’s fasteners. Landru was charged with 11 counts of murder.

Remember, in 1919, there were no terms like “serial killer.” Only Jack the Ripper was widely known to have killed multiple people, and a murderer like Landru was a shocking affront to the French people. His trial lasted a month. He believed that without a body, he could stonewall the court and kept virtually silent during trial. A jury found him guilty, and he was sentenced to death.

In February, 1922, Landru faced the guillotine. He showed little remorse for his actions, although he did express embarrassment his wife would discover the affair he was having at the time of his arrest. Some argue that because Landru killed for financial gain rather than a sexual motive, he can’t be classified as a serial killer. Rather, he overlaps categories, becoming a sort of Black Widow spider, taking what he needed and killing his mate with no remorse.

What do you think? Was Landru more complex than the modern serial killer? Did he receive a fair trial, or should he have been released for lack of a true body?

Thanks to Catie Rhodes for the topic!