Today is the thirty-first anniversary of the murder of John Lennon. Loved by millions, the singer was gunned down in front of his home in New York City by Mark David Chapman. The news broke during Monday Night Football, and the world went into mourning.

Lennon’s murder is legendary. But December marks the anniversary of another (possibly even more) tragic event–the Yogurt Shop Murders.

On December 6, 1991, four teenaged girls were brutally murdered at The “I Can’t Believe Its Yogurt” shop in Austin, Texas. The murderers set the shop on fire, and the bodies of thirteen-year-old Amy Ayers, seventeen-year-old Jennifer Harbison, her fifteen-year-old sister Sarah, and seventeen-year-old Eliza Thomas were found after the blaze was extinguished.

Firefighters put out the flames and made their way to the back of the shop where the fire started. There, the bodies of the four girls lie on the floor of the shop.

The murder of four children isn’t even the worst part. It’s the manner of their deaths—stripped down, tied up, and burned. The bodies were stacked.

Police believe the killers forced the girls to remove their clothes, then bound them. Each girl was shot in the head with a .22. Amy was shot twice–once with the .22 and another with a .380 caliber.

Eliza, Jennifer, and Sarah were stacked in a pile, doused them with accelerant, and then lit them on fire. Amy was found a short distance away from the others.

The murders remains unsolved. No security cameras, no eyewitnesses. But there are suspects, men that are walking around free today while the debate over DNA and the legal system rages.

There was evidence the killers were looking for cash, but the nights earnings had already been deposited in the drop box in the back of the store. Dozens of interviews followed, including questioning devastated friends and family, as well as anyone visiting the shop that night.

A customer reported seeing a strange male outside the shop earlier that day, and a crime scene analyst matched the sketch to a wanted rapist. He’d been identified as Alberto Cortez but had fled with two other men – Carlos Saavedra and Ricardo Hernandez.

Eventually Saavedra was caught and confessed, but then recanted, claiming Mexican authorities forced the confession. Austin police agreed. They had a list of suspects, but not enough evidence to do anything. The case eventually went cold. 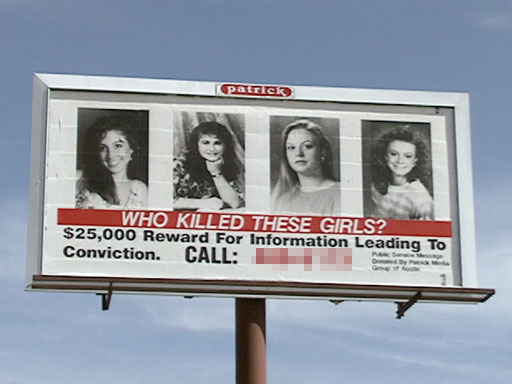 Eight years later, a new task force revisited the now cold case. Sgt. Ron Lara believes the murders cased the shop during the day and later re-entered through the back door. And he had a new person of interest: Maurice Pierce.

Pierce was only sixteen in 1991. He’d been arrested a few days after the murder for carrying around a .22 at Northcross Mall, a location near the yogurt shop.

In 1991, ballistic tests on the gun were inconclusive. Pierce named friends he was hanging out with that day, and police followed up. Michael Scott, Forrest Welborn, and Robert Springsteen backed up Pierce’s story.

In 1999, Scott agreed to come in for questioning. He confessed to all four murders and claimed his three friends had also participated. Police tracked down Springsteen in West Virginia. He confessed and named Welborn and Pierce as participants.

Springsteen’s trial began in May 2001. His defense claimed the confession was coerced, but the jury found him guilty, and he was sentenced to death. Scott saw the same results a year later, this time with a life sentence.

Pierce and Welborn managed to walk because the prosecution decided there wasn’t enough evidence to win.

Four years later, on May 24, 2006, the families of the victims suffered yet another tragedy. Scott and Springsteen’s convictions were overturned by the Texas Court of Criminal Appeals. Defense attorneys used the Sixth Amendment—stating the defendants had a right to face their accusers.

The U.S. Supreme Court, in a case titled Crawford v. Washington, changed 25 years of how we prosecuted cases. The court said that you cannot use another person’s confession in a co-defendant’s trial without the co-defendant being allowed to call his accuser to the stand.
— Travis County ADA Efrain De La Fuentes.

The prosecution had used snippets of Scott’s confession at Springsteen’s trial and vice versa, but neither had the chance to question the other on the stand. The Texas Court of Criminal Appeals ruled both had the right to a new trial.

Lovely system we have, isn’t it? If these men are in fact guilty, it seems their rights are more important than the victims. But what if they are innocent? Is it possible both Springsteen’s and Scott’s confessions were false?

Prosecutors were sure they had the right men and resubmitted evidence for new DNA testing, a science that had greatly improved since 1991. A new male sample was found on Amy Ayers, but the DNA didn’t match any of the four suspects. Either the suspects had help from a fifth, unknown male, or none of the accused were involved.

Prosecutors were forced to dismiss the case rather than risk an acquittal. Remember, murder has the double jeopardy rule. Once a person is found not guilty, they can’t be tried again.

The debate over the men’s culpability centers on two theories:

1) the DNA was tainted, having come from a first responder or someone in close contact with Amy.

2) Police and prosecutors insist they have the right men, but have always suspected a fifth person was involved. During questioning, Scott had mentioned another man being with them that night, but claimed he couldn’t remember his name.

Police have reached out to the first responders and anyone who could have touched Amy that night, as well as presented the community with a description of the man but so far have no new leads.

In an odd twist, Maurice Pierce, one of the men suspected but untried, was killed by police during a chase in 2003.

Tuesday, December 6th, marked twenty years since the lives of four innocent girls were taken. Police and defense attorneys are still at odds. The defense claims the police botched the case from the start, and police insist they have the right men. But the DNA is still hanging over their heads. Who does it belong to? Could both Scott and Springsteen’s separate confessions have been coerced?

What do you think? Should the Austin police admit their error and start over, or are two coldblooded killers on easy street thanks to a flaw in the system?