Like a lot of mystery writers, I read both of these series growing up, but I definitely preferred one over the other. For me, it was Trixie Belden. I loved her blunt personality, loved that she came from a working class family, and I loved her exploits with the Bob-Whites. I’ve read most of her … Read the rest →
6 comments

|   Stacy
Black Market Adoption, Two Dead Women, and a Demented Killer. How far would you go to bring justice? Nick longed to touch her face, caress her cheek in the way lovers so often did. He fisted his hand against the console. “All we can do is wait.” “Please give me the phone.” “She’s not going … Read the rest →
2 comments

|   Stacy
In less than a month of release, TIN GOD already has 35 5-Star Reviews! Thanks so much! Here’s an exclusive excerpt for Teaser Tuesday:) He needed to pay. Barbecue. The rich aroma filled the air. Light glowed from her parents’ backyard. The family was outside, no doubt enjoying some of Sonia’s excellent home cooking. Paul … Read the rest →
Leave a comment 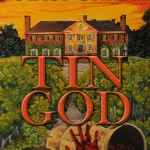 Since its release on April 8, TIN GOD hit the Hot New Releases list in two separate categories and already has 26 Five-Star Reviews. Here’s a sample for you! Jaymee went back to scrubbing the table. Her fingernails dug into the Formica. “Detective Charles had more questions for me. He offered a ride, I took … Read the rest →
2 comments 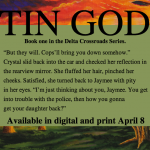 It’s finally here! My second mystery/suspense, TIN GOD is now live on Amazon for Kindle or paperback. The Kindle Book Review called TIN GOD “an emotionally charged, thought provoking, stunning mystery suspense,” and my wonderful advanced readers have fallen in the love with the book. Thank you all for your support and encouragement! Click on … Read the rest →
12 comments

|   Stacy
Since my upcoming mystery/suspense novel, TIN GOD, deals with religion and betrayal in the deep south, today we’re talking about the unidentified serial killer known as Bible John. Between 1968 and 1969 in Glasgow, Scotland, three young women were murdered after meeting a mysterious man at the Barrowland Ballroom. Victims 25-year-old Patricia Docker was found … Read the rest →
8 comments 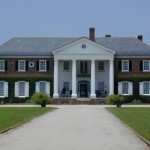 Okay, so it’s not true crime. It’s my very own mystery in Mississippi. Tin God’s release date is April 8th, and I’m excited to give you the exclusive cover reveal by Night Owl Reviews. The inspiration for Tin God’s cover Tin God is set in the fictional town of Roselea, Mississippi, modeled after Natchez. It’s … Read the rest →
24 comments

|   Stacy
Today’s Thriller Thursday is about history-one of my favorite topics. March is a month full of interesting criminal history, and here are a few of the events that stand out to me. On a side note, today is Einstein’s birthday. Happy 134th! This Month in Criminal History March 1, 1932: Charles Lindbergh’s son is kidnapped … Read the rest →
14 comments