Soldiers, Seals and Cops! What makes a hero? → 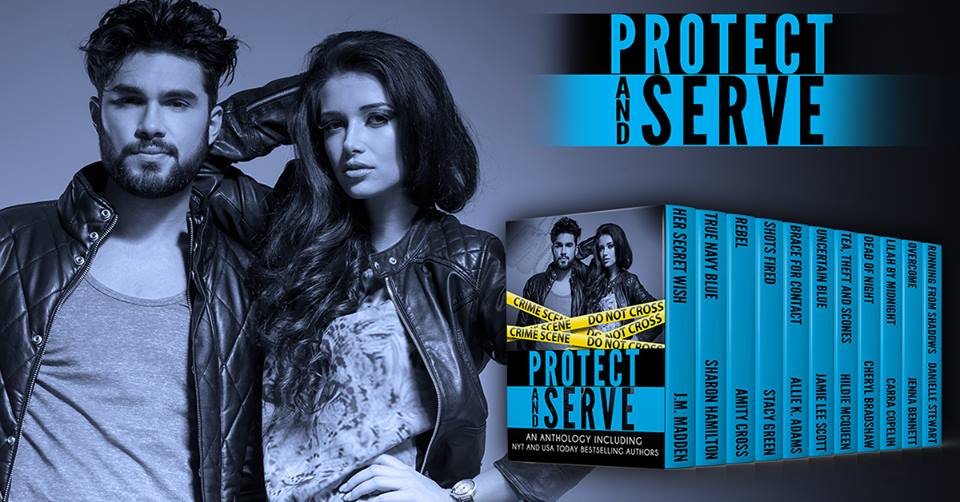 I’m so excited to be a part of this awesome anthology celebrating the men and women who serve this country. Here’s the first chapter of my contribution, SHOTS FIRED.

A domestic dispute turns into a hostage situation. Can criminal investigator Cage Foster save the victim…or will he become a victim himself?

Cage Foster glared at the coffee pot that had to be older than he was. The relic was one of the few things Cage wished had stayed at the Adams County Sheriff’s old location. He didn’t miss the historic building, with its bad insulation and pathetically slow Internet connection. The modern brick building provided more space for growing departments, more inmates , and better parking.

He’d love to know who’d made the executive decision to prolong the suffering of this groaning, slow-assed coffee pot.

“Patience is a virtue God forgot to bless you with,” his mother used to tell him. She’d laugh at his blustering and fretting, tell him to sit down and relax. He liked to think that being a cop in a small town had helped to teach him patience, and maybe it had, but he still loathed the coffee wait. The stupid machine rattled like it might explode. Black coffee trickled into the stained carafe.

“Foster.” Marla Towne, the administrative assistant for the Adams County Sheriff’s Criminal Investigative Division, huffed into the room. Marla had recently started wearing contacts and couldn’t get used to them. Her eyes seemed to be stuck wide open. Combined with her thin face, she looked like a perpetually shocked bird.

Cage usually tried to avoid direct eye contact, but the sharp tone of her voice sent a wave of apprehension through him. His head jerked up, and his body felt cold. She’d gone pale. Fear clouded her eyes like cataracts.

“You said Dani and the baby were at Magnolia House today, right?”

“I just picked up a disturbance call from Roselea.” Marla’s normally confident voice wavered . “Some guy walking by Magnolia House said he thought shots were fired.”

Cage stilled, his energy draining. The coffee pot hissed again, a few more drops spewing into the glass carafe. He abandoned the coffee and rushed out of the break room. The expanse of the new building suddenly seemed like a gaping chasm as Cage raced back to his desk.

A mistake. It had to be.

He pictured his tiny, sleeping infant in Dani’s arms, as she’d been when he’d said goodbye to them early this morning. Emma had just turned six weeks old. After her premature birth, she’d only been home from the hospital for ten days.

Marla chased after him. “Maybe she and the baby already left.”

“Dani’s still really tired,” Cage said as he rounded the corner to the Criminal Investigative Division’s array of gray cubicles. “Spending months on bed rest slows down your metabolism and sucks away your energy. That’s why she’s actually taking the help Jaymee’s offered.” Thanks to preeclampsia complications, Dani was still adjusting to motherhood after spending much of her pregnancy on bed rest. She handled the transition better than Cage. He hated leaving Dani and Emma alone, no matter how many friends offered their support. He didn’t doubt Dani’s ability to handle everything on her own; he just felt better when she and the baby had company.

He’d finally reached his desk. Feeling his internal temperature skyrocketing, he grabbed his cell and called Dani. Every ring seemed to take forever, even as his mind tried to rationalize things.

Shots fired. That could mean any number of things, including a car backfiring. Nick had been tinkering with a 2001 Mustang he wanted to restore, and civilians often mistook an engine backfiring for gunshots.

Jaymee kept a Colt Defender in her nightstand. If the windows were open, the gun’s discharge could have been heard from the sidewalk that stretched past Magnolia House. But the girl he’d grown up with had been around guns since she could walk. She wouldn’t have fired it without good reason. Much less in the house. The sound couldn’t have been a gunshot.

“Hey,” Dani’s tired voice sent a rush of relief through him. “Are you leaving soon?”

“Not quite yet.” Cage sagged against his desk, relief pulsing through him. He gave Marla a thumbs-up, and she nodded, her hand over her heart.

Now he had to tell Dani why’d he called, and he didn’t want her to worry over nothing. And surely this was nothing. “Hang on.” He covered his speaker. “Marla, keep the channel clear and see if you can find out if the Roselea patrol officer checked in with the residents. I’ll call in when I get there.”

He grabbed his radio and keys to his county-issued car. “I just wondered if you and Emma had left Magnolia House yet.”

“Hours ago.” Disgust darkened Dani’s tone. “I wanted to spend the afternoon catching up with Jaymee, but they’ve got an obnoxious guest. Emma and I couldn’t stand it any longer.”

Fresh worry swept over him. Their closest friends had turned historic Magnolia House into a bed and breakfast. After a successful year, the two of them had planned to take Labor Day weekend off. “I thought everyone was supposed to leave this morning?”

“They were,” Dani said. “But this guy talked Nick into letting them stay another night. I thought Jaymee was going to kill him.”

Cage hurried out of the building, his boots loud on the pavement. He unlocked his car and pulled out of the lot with a squeal of his tires. Probably overreacting. Roselea P.D. would love this one. They didn’t care for the sheriff’s department butting into their cases–even when they needed the help.

But Cage needed to be sure. Then he could get home to his family. If he was really lucky, he’d swipe a piece of Jaymee’s strawberry pie before he left.

“So the guy caused a disturbance?”

“Yes,” Dani said. “ If he wasn’t in his room yelling at his wife, he was coming down demanding something from Jaymee. Fresh towels, toilet paper. Whatever he could think of. Emma couldn’t get her nap, so I finally left.”

“I don’t blame you.” Cage hoped the worry hadn’t leaked into his voice. “I’ve got a quick call to follow up on–I’m sure it’s nothing–and then I’ll be home. Kiss Emma for me.”

Cage barely caught his laughter. Her cooking hadn’t improved much since she moved from Yankee land. “That’s all right. I’ll bring something home. I know how tired you are.”

Cage drove with one hand, punching first Jaymee’s and then Nick’s names on his call log. Neither of them answered their cell phones. He tossed his phone into the passenger seat.

His attempt at rationalizing didn’t work. Worry spread through his system with the speed of an infected bug bite. His skin felt hot and stretched.

He drove well over the speed limit toward Roselea. His knuckles had gone white from his grip on the wheel. Twice he skidded into the gravel, kicking dust up behind him. He turned the radio up, listening to the chatter of the dispatch.

A 10-47 disturbance call came in; another deputy took it. A traffic accident in southwest Adams County. Neither call concerned Cage. He just wanted to keep dispatch open in case Marla came through. He needed to hear her say the Roselea officer had checked in, and Cage’s friends were fine.

The rock in his stomach and the knot between his shoulders refused to lessen. The familiar drive between the two towns moved at a slug-like pace, the palatial antebellum homes no more than a blip on his frequency. Clouds blocked most of the afternoon sun as it dipped into the western horizon. Against the hazy gray, the bright orange and deep red of the fall foliage seemed freakishly bright. Warning beacons.

Finally, the city limits of historic Roselea crept out from behind the towering live oak trees. A slow-moving rental car forced Cage to hit the brakes. He gritted his teeth and whipped into the passing lane.

His sprint didn’t last long. A dust-covered car with Louisiana plates loitered in the left lane.

“Move your ass,” Cage shouted. “Celebrate Labor Day in your own damned state. Stupid freaking tourists.” The last major holiday of the summer meant big money for local businesses. Roselea’s many antique shops relied on the weekend to help counter the seasonal slowdown, and the antebellum home tours enjoyed swollen crowds. The holiday also meant the local police were stretched too thin.

Cage finally zigzagged around the slow car, taking the curve coming into Roselea much too fast. He careened into the gravel, nearly taking out the sign advertising the Labor Day parade and celebratory barbeque in the Roselea City Park.

The sight of life going as usual did nothing to ease his nerves. He barely touched the brake as he turned the corner of Forrest Street. His breath snagged at the site of Magnolia House’s Corinthian columns peeking out from the more than twenty magnolia trees at the front of the property. Their summer blooms were long gone, making the trees look like sad sentinels.

He sped past the trees, hoping to see a parked Roselea patrol car and an officer standing on the front porch. Instead the house stood huge and silent, and the black iron fence that surrounded the main house suddenly seemed more appropriate for a prison yard. Wild rosebushes grew all around the fence, their climbing vines strangling the bars. The gates gaped open.

Had the Roselea police already come and gone? Or were they tied up with something else, assuming the call had been a crank?

Near the garage were both Jaymee’s and Nick’s vehicles, including the dilapidated Mustang and a small four-door car he assumed belonged to the weekend guests.

Cage parked the cruiser and yanked himself out of it. He listened, expecting to hear Mutt’s bark or Jaymee’s shout of hello. He heard only silence. Another jolt of nerves ran up Cage’s spine at the sight of the closed windows. The unseasonably cool weather meant Jaymee would have had the windows open.

The passerby probably wouldn’t have heard the shot from inside the house. It sat too far from the street. Cage wanted to feel relief, but the sudden cloying scent that wafted past him could have been a shot of adrenaline. He tasted the copper on his tongue. Instinct raised the fine hairs on the back of his sweating neck. His gaze shot to Jaymee’s bird feeders. Where were the little gluttons? Most days those feeders were full of songbirds fighting for seed and suet. Not a bird in sight. Not a single song coming from the trees.

The quiet made his stomach coil in anticipation. He strode toward the house but stopped at the sound of a desperate whine. He saw the source of the noise instantly, and everything in the world ground to a halt.

Mutt, Jaymee’s precious dog, lay on his side in a pool of his own wet blood.

Soldiers, Seals and Cops! What makes a hero? →