We've banded together to bring you four of our thrilling novels (because with the heat wave we've got going on, we all could use some chilling goosebumps to cool us down, right?). Read about each book below, and pick each up at your favorite ebook retailer for $0.99. Happy reading! 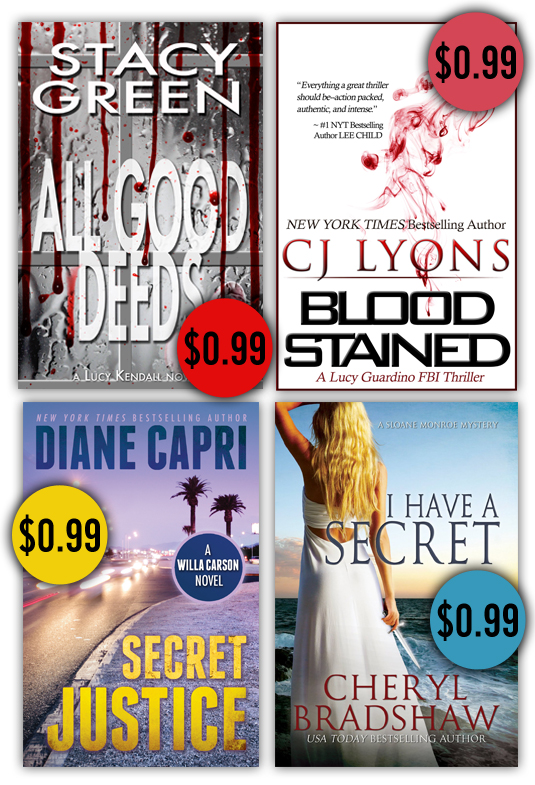 Lucy Kendall doesn't believe she's a serial killer. She simply eradicates the worst of society and brings justice to the innocent–the children she failed to protect during her decade in Child Protective Services.

A missing child sets off a chain of events linked to a suspect in a life-changing case in Lucy's past. Her chosen path is terrifying–but the search for the kidnapped child pulls her into web of evil and malice beyond her darkest imagination.

Until recently Supervisory Special Agent Lucy Guardino was a shining star in the FBI's roster. But after killing a man and disobeying orders, Lucy's been sidelined, chained to her desk. When a mysterious letter arrives hinting that, thanks to Lucy, the wrong man was blamed for a string of serial rapes, kidnappings, and killings four years ago, Lucy jumps at the chance to re-open the case—despite orders to leave well enough alone. What Lucy doesn't know is that what happened four years ago was all a lie, fueled by sacrifice and betrayal, designed to shield the real killer.

With the lives of her family, a group of innocent children, and the future of one desperate boy at risk, Lucy races to stop an innocent from killing and a killer from butchering more innocents.

Just as Willa is recovering from the shock of meeting her father’s new trophy wife, her secretary Margaret Wheaton becomes mysteriously involved with a nefarious jeweler. When both Margaret’s husband and the jeweler end up dead, Margaret is the number one suspect. Judge Willa sets out to prove Margaret innocent and takes the reader on a ride through Tampa’s month-long pirate party, with twists and turns that keep you guessing until the very end: whodunnit?

I Have a Secret (Sloane Monroe Book 3) by Cheryl Bradshaw

No one knows the value of keeping a secret more than Doug Ward. But after washing the past twenty years down with a smooth glass of whisky, his steely resolve has started to crack. And he doesn't want to keep quiet. Not anymore.

When dried blood is found on the deck of the cruise ship where Doug was last seen, private investigator Sloane Monroe finesses her way into the surveillance room, sees Doug's bloody body heaved over the railing.

How many more will die before Sloane uncovers the biggest secret of all?