Southeast Iowa pretty much fits the stereotype most people have of the state: lots of cornfields, farm houses, pickup trucks, and plenty of guys wearing cowboy boots. The county I grew up in, Van Buren, probably has more dirt and gravel roads than paved (don’t quote me on that). I graduated with 50 people, and things haven’t grown much since then. It’s a small area where most people have an idea of everyone else’s business, and when I was a kid, we didn’t lock our doors.

My parents still live in the same white farmhouse I grew up in, and sometime in the last several years they started locking up at night. But that was it. No one ever thought about locking the doors during the day, whether they were home or not. That changed a week ago when my dad came back from taking my mother to dialysis and a strange, white van was in the driveway. As he sat in his truck trying to figure out who the vehicle belonged to, a blond woman walked out of their house.

Dad confronted her, and she gave him some half-assed excuse about looking for Stockport, another tiny town every local knows how to get to. He didn’t see anything missing, and he didn’t call the Sheriff. But when Mom got home later in the day, she realized her Percocet was missing. I got involved and called the Sheriff. We didn’t have much hope of finding out who the woman was, and I posted a warning to local Facebook friends. Guess what? No less than five different people contacted me with her name and various but similar stories about her.

That’s when I got really pissed. If these people knew who she was just by description, how could the deputy not? I called the Sheriff with her name, and he knew exactly who she was. As a matter of fact, he’d had recent dealings with her. My father later identified a recent booking shot, and the deputy said he’d see what he could put together. Since my father caught her trespassing at the very least, we were hopeful she would be charged. From what I hear, it’s been very hard for the police to keep her nailed down with anything. I’m not sure why that is, and I’m trying to give them the benefit of the doubt. But it’s infuriating. This girl preys on older people for their prescription medications, as if the senior community doesn’t have enough to worry about. On top of dialysis and watching everything she puts in her mouth, my mother now has to wonder if she’s totally safe in her own home.

Times have changed. The doors are locked now. Our kids will never know what it’s like to grow up trusting their neighbors, and that’s very sad to me. We now have to teach them to be wary of anyone who approaches them, and to constantly warn them that no matter how nice anyone looks, any individual is capable of harming them. It sucks, but that is at least something I can control.

Nearly two hours away from my aging parents, I’m frustrated. I’m waiting for an update from the deputy tonight, and if nothing is moving in the case, I’ll be talking to the Sheriff again. And I’m not above taking out an OP-Ed in the county newspaper, because if this girl isn’t stopped, she WILL prey on more senior citizens.

What about you, readers? Would you let things lie or keep pushing the issue? 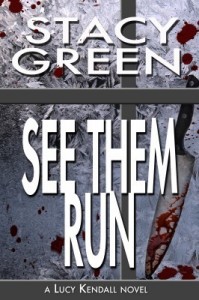 Don’t forget, See Them Run (Lucy Kendall #2) is now available! And if you’re not a member of my mailing list, sign up now. A brand new character is coming to the Delta Crossroads, and I’m giving my mailing list subscribers a serial novella featuring the character for FREE. Coming in February!

Have a wonderful and SAFE holiday!

2 comments on… “Confessions of a Thriller Author: When Someone You Love is the Victim”