Who am I? More than just another aspiring writer. 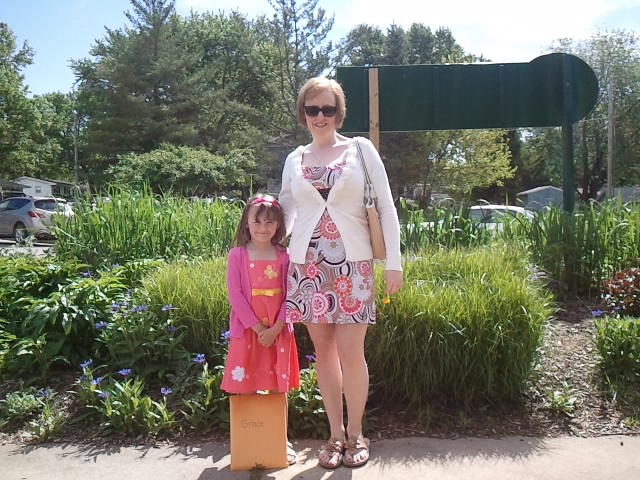 Grace and I at her Kprep graduation Friday. She’s working on her smile.

Like every other writer, I’m trying to establish my online platform. Blogging, tweeting, getting involved with Goodreads – anything I can to be seen and heard.

But what do I talk about to bring people to my blog?

At first, I blogged about my personal writing process and quickly learned that was pretty mundane and boring.

Then I tried talking about the hot-button topics like self-publishing and got a bit more interest but really, what do I know about self-publishing? I haven’t gotten that far yet. I’m an aspiring writer working on my second novel and the first I will try to publish. What can I talk about with any sort of knowledge other than what I’m learning? I certainly can’t claim to be an expert.

The lovely Anne-MhairiSimpson took the time to give me several pointers, the biggest of which was to write about me and to work on getting to know people. I liken it to being at a huge party and feeling like an outsider. I need to mingle. Socialize. How can I expect anyone to follow me and support my blog if they don’t know who I am?

I tweaked the ‘about me’ section so it actually says something about me and posted some of my writing. That got some nice feedback, but I still have many more hits than comments/followers. I’m not sure if that’s because people just don’t take the time to comment or because I haven’t impressed them enough to say anything.

Anne also said something that really resonated with me: I have a feeling you have spent most of your life doing what you should be doing and trying not to bring too much attention to yourself.

It’s true. I’ve always been a ‘walk the line’ sort of person, playing by the rules and not seeking attention. I’m self-conscious and don’t like to stand out in a crowd. That’s okay in real life, but online, to be seen as anyone other than just an annoying person trying to get followers, I have to shed the proverbial mask I’ve become so accostumed to wearing.

Who am I? Many things – a wife, a mother, daughter, friend, and writer. I’m impatient and headstrong. If I decide I want to do something, I want to do it now before I change my mind. I have a quick temper and a smart mouth, but I’m working on that. Progress is slow.

I have little patience for bigots and racists. I respect other’s opinions but I have strong ones of my own when it comes to certain issues. My husband calls me a bleeding heart liberal, and maybe that’s true. But discrimination in the name of political/religious control disgusts me.

I voted for Obama, and I’d do it again.

My guilty pleasure is pop music. I will be seeing BSBNKOTB this summer and taking my five-year-old daughter. She’s more excited than me, and the chance to have the experience with her means a lot.

I have a fascination with the macabre and death, although I also harbor a huge fear of the latter. I watch gritty real-life cop shows and read too many true crime stories about terrible people. I often think I should have gone into psychology, maybe even forensic psychology. Then again, I’m not sure I’d have the stomach when faced with the real life horror these people deal with on a daily basis. I’ll stick to watching at a distance in my comfy recliner.

I’ve battled depression/anxiety all my life, and it’s only in the last year or so I’ve given in and tried medication. The change has been amazing.

I can’t leave the house without checking (several times) to make sure everything that can cause a fire is off, even if I know I haven’t used it. Sometimes I even jump out of the car to double check. Apparently I’ve got a bit of a compulsion.

I believed in Santa Claus until I was nine. I can remember the exact moment when I found out he wasn’t real.

I started writing in a spiral notebook when I was eleven or so, a story about me and New Kids on the Block. That was in the dark ages, long before the Internet, so I didn’t know what I was doing was writing fan fiction.

I still have the notebook.

My mom is my best friend and the possibility of losing her to diabetes related complications terrifies me.

I lost my oldest brother in a car accident in June of 2005 when I was twelve weeks pregnant. What happened in the next forty-eight hours solidified my belief in the supernatural and God.

In September 2009, I was reading a text a few blocks from our house. My right tire rolled up the side of a bridge and the car flipped, skidding across a well-traveled road and ending up facing the other way. I was hanging upside down, trapped in my seatbelt. The hardest conversation I’ve ever had was telling my mother she’d almost had to bury another child.

I’ve never texted and drove since.

Retail therapy is the best kind, and I’ve got the shoes and purses to prove it.

I believe everything happens for a reason, even if the reason makes no sense.

I have three dogs: two miniature doxie’s who never shut up and a Golden Retriever. I had to give up my cats due to allergies, and the experience was excruciating. Thankfully I found good homes for them.

I cry when I’m angry, which enrages me.

I’m a good listener and a great friend. But I won’t sugarcoat things. If you’ve screwed up, I’ll tell you.

Her name is Gloria, short for Glorious.

What about you? What are the special, quirky things that make you unique?

12 comments on… “Who am I? More than just another aspiring writer.”