Saving a baby mouse…the highlight of my vacation 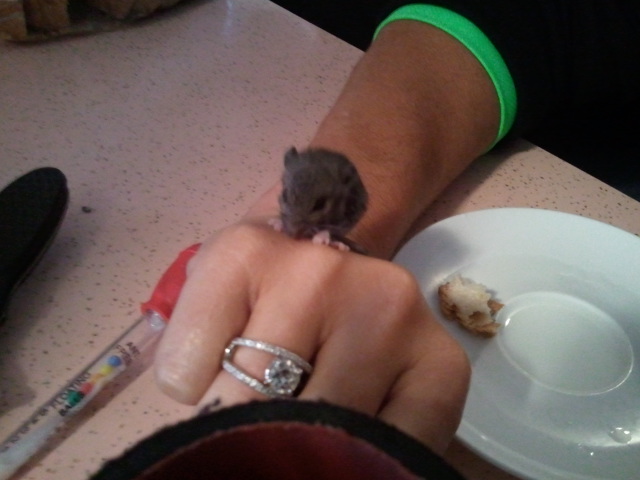 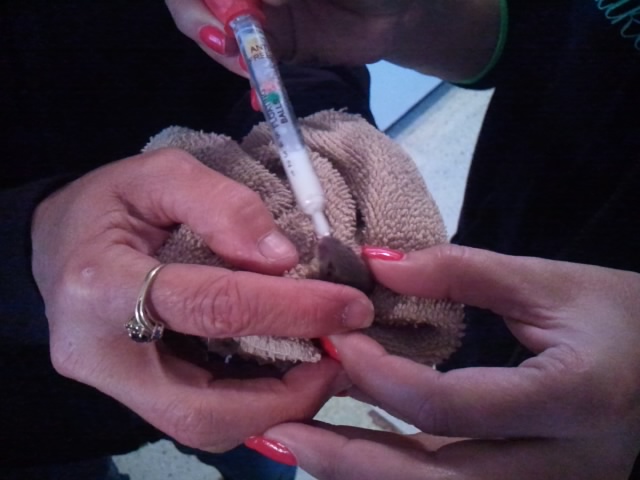 We’re vacationing in Deer River, Minnesota, for the week. Lots of fishing and way too much eating. I didn’t plan on doing any blog posts, but I had to share the story of Lucky the mouse.

On Saturday, my sister Kelly put her boat into the lake and a big mouse promptly scurried out. She couldn’t catch her, and the mouse disappeared underneath a bench.

Oh well, on to the fishing, right?

Yesterday afternoon I went out with her and my other sister, as well as my husband and some others. Kelly jumps into the boat and sits down, and what does she see? A tiny weeny baby mouse laying on its side. We thought it was dead at first, but he was just really cold. Kelly snuggled him into her hand, and we tried to get him to go back under the bench where we think the mother’s nest is.

The men said to throw him into the lake and put him out of his misery since he was so little, but we couldn’t do that. He’d survived this long, so I named him Lucky. My sisters and I had no clue how to get him to eat, so we stopped at a gas station (remember, we’re way out in the boonies) looking for an eye dropper or anything we could use to put milk in. Best thing we could find was an antifreeze tester, fresh out of the bag. We cut off the tube part of it and tried to use the tester as a syringe, but the opening was still too big. Finally I put some milk into the crevice of my sister’s palm and all of the sudden we hear this lapping noise. He’d ate out of her hand!

We made him a little nest out of paper towels in an empty Mountain Dew box, and he’s made it through 24 hours. The milk we left in a little Gatorade lid was gone this morning, and we are seeing little mouse droppings around, so we’re excited he’s eating.

Best thing about it? He’s totally spoiled! By this morning, he’d already started getting excited when he heard voices and wants to be picked up. He loves to snuggle into your palm and sleep, and he doesn’t like to be ignored. I went to check on him this afternoon, and he was buried under his towels. I said something, and the mound of towels started to shake. There he was, scurrying out of the towels and climbing to the top, SQUEAKING! I almost died! He kept trying to climb out of the box (thankfully it’s too deep, and he’s still too little), so I finally took him out. He snuggled right into my hand and fell asleep.

We’re trying not to get too attached since he’s so little, but everyone has been holding him and passing around, and Kelly has already said she’s going to have to take him home with her.

Let’s hope sweet Lucky continues to have a good week!