Sample Sunday: Dig, dig, dig until you find the truth. →

I’m very excited to have award winning mystery author Darcy Scott today. She writes great mysteries set in a creepy and haunting island setting. And she does her writing on a boat! How cool is that?

Please make sure to leave her some love in the comments and check out her books. 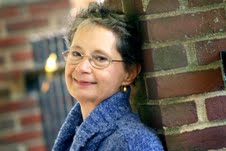 Thanks so much for having me on, Stacy!

First off, a bit of an introduction. I’m a Maine-based, live-aboard sailor and author of the award-winning Maine Island Mysteries—a series that grew out of my love of the Maine coast and its rugged, self-sufficient out-island communities. During the summer months, my husband and I spend as much time as we can cruising those islands, especially those in the Penobscot and Casco Bays, which is where the series was born—a series I’d never planned on writing.

A number of years ago, on a stormy sail back from Mt. Desert Island (mid-coast vacation playground of the early 20th century Rockefellers and, more recently, domestic diva Martha Stewart), we took refuge in the small harbor at Matinicus Island—rugged home to centuries of warring, trigger-happy lobstering clans. This is not only the most remote inhabited island on the eastern seaboard, it’s surrounded by some of the most crustacean-rich waters in the world.  The lobstermen who make their living fishing here are understandably territorial, and protect their fishing rights in whatever manner they deem appropriate.  Most of these guys actually carry rifles in their wheelhouses. There are no police on Matinicus (no officialdom of any kind, in fact), no banks, stores, restaurants, doctors or hospitals—though there are a couple of EMTs for those inevitable brawls.

Perfect place for a mystery, right?

I should mention here that I not only live on my boat, I do most of my writing there, so I immediately began a novel called simply Matinicus (May, 2012), featuring the hard-drinking, bachelor botanist Gil Hodges—a funny, self-deprecating guy with an unfortunate propensity for psychotic, often homicidal women.

At the start of the book, Gil arrives on the island ostensibly to catalog a purported 22 species of wild orchid, when in reality he’s simply running from yet another of these disastrous sexual conquests, figuring the place so remote, so rugged, so utterly unwelcoming to strangers it would deter even this latest bizzarro chick.  Shortly after he arrives, however, islanders begin to die rather gruesome deaths and he’s forced to try and solve the murders to prove his own innocence. Along the way he meets a gorgeous, wealthy widow who trips all his bad triggers, discovers an old diary full of island secrets, and finds himself inexplicably hounded by the ghost of a child some two hundred years dead. The book was a hoot to write and I was sorry to see it end.

When I finished Matinicus, I figured I was also finished with Gil. So when I began another book titled Reese’s Leap (March, 2013), set on another Maine island, I envisioned it as another one-off murder mystery—this one about a group of complicated, high-powered women partying during an all-female retreat when things go desperately wrong. Nary a man in sight. But I found I missed Gil. The new story felt flat without his energy. And given his womanizing ways, this book was actually the perfect vehicle for him. In this book, he ends up stranded on the island with the women when fog rolls in. When a stranger appears out of nowhere, insinuating himself into the fold and bent on a twisted kind of revenge, it falls to Gil to keep the women safe, despite a dawning awareness that not everyone will make it off the island alive.

Personal experience again played a part in developing the plotline for Reese’s Leap. I caught the first glimmers of the story while on my own annual, all-female retreat on a remote island off the coast of Maine. Take five women itching to raise some hell, put them in a rambling, hundred-year-old lodge with no electricity, phone service or other connection to the outside world, throw in a three-day fog, and the imagination can’t help but run a little wild.

With the publication Reese’s Leap, the Maine Island Mystery Series was born—albeit unintentionally. I’m now hard at work on book three, Ragged Island, and envision at least one more in the series.

I’ve learned a lot about series writing during my initial foray into the process. Knowing what to reveal and not reveal about what happened in the first book proved to be quite the tiptoe. On the one hand, I wanted to drop enough hints to entice the reader who hadn’t already read Matinicus to go back and do so; on the other hand, I had to be careful not to unintentionally give some important plot element away in the process. This is harder than it sounds. In my case, it meant being careful not to reveal the age or sex of the murderer in Matinicus—for reasons that will become obvious if you read the book. I also had to work hard not to inadvertently contradict myself from one book to another in regard to the specifics of my series’ protagonist—a complicated and deeply conflicted guy with a sordid past in regard to women. You’d be amazed how many times I’ve seen this happen in other books. My solution was to draw up character personality sketches—ones I keep updated and take with me for any characters that continue from book to book.

Three characters from Reese’s Leap are actually coming along for book three, joining a few of the battered who survived Matinicus. Now I get to sit back, waiting to see just who else will show up…

Find Darcy’s Books on Kindle and Barnes and Noble
Visit Darcy at her website.

An excerpt from Reese’s Leap:

It’s just after nine when I toss back another triplet of aspirin and—cap tugged low against the sun—slip on my shades, heft my pack, and make my way toward the dock behind the others.  The sight of  David and Lily—who are loathe to be parted now it’s down to it—is bittersweet indeed, tripping my thoughts toward Nora, or maybe Rachel. Who the hell knows anymore.

The chicks are going on about some picnic they’re planning for later in the day as my thoughts turn toward work and the deluge of Fall term minutia no doubt piling up in my campus mailbox. Something to throw myself into, thank God. Put the last few days behind me, chalk up all the longing and regret to the kind of  hoodoo-voodoo shit my numerous unresolved issues unleash on me from time to time. Soon as I hit the mainland, though, I plan to visit Burt and that rifle of his, Adria’s thoughts on the matter be damned—my parting salvo in the saga of Pete and Earl. I figure the guy can’t be that hard to find.

“Where the hell are Nora and Brit?” Margot asks as we make the dock. “We said nine, right?”

“Nora’s sleeping in,” Adria says, climbing into the skiff as I casually scan the tree line for any sign of Pete’s sneering countenance. “Brit never came home last night, far as I know.”

Seating herself before the motor, she braces her feet on the floor of the boat and gives the starter cord an initial tug. Nothing. Gives it a couple more pulls, checks the gas, tries again. Chokes it. Keeps all this up ’til she’s pretty well winded.

“Doesn’t like to start if it’s been sitting a few days,” she says, making room for me on the seat.

I put some elbow grease into a couple stiff pulls. Nothing.

“Try choking it again,” Adria instructs, which I do, then give it another try. And again. Nada. Not so much as a spark. I pull off the engine cover.

My experience with outboards is admittedly paltry, limited as it is to the one on the Somerset Island skiff—a temperamental beast that burned through fuel faster than I go through scotch. It was a bitch to start, and almost impossible to bring to life if it rained. The first time I took it out alone—an ice run to Rock Island when I was twelve—I spent half an hour trying to restart it when it stalled in the middle of the bay. Sat there ’til a fisherman cruised by offering assistance. Turned over on the first pull.

I bring this up because, useless as I’ve proven myself to be when it comes to such

things, even I can tell when a spark plug’s missing. Leaves a hole.

“Gone?” she asks, peering into the motor. “How can it be gone?” She flicks a suspicious glance my way.

“There’s a kit with extras and a socket wrench,” she says, clearly unconvinced. “Blue plastic box with a flip lid stuck to the underside of the seat.”

Reaching down, I feel around ’til I locate the metal bracket and release clip where said plastic box would normally snap in—only it, too, is gone.

A brief inspection of the boat reveals that the oars are also missing, as is the handheld VHF radio. Adria sits back, momentarily flummoxed, stiffening as she glances to the opposite side of the float. “The kayaks,” she whispers, nodding toward the spot where the three of them were last tethered together. No sign of them now.

A trickle of unease as I glance again toward the treeline where that clever fucker is no doubt watching. Crazy and clever—not good.

“There a problem?” Duggan asks, unwrapping himself from Lily. He grows still, his gaze joining mine as he catches my mood. Together we peer toward the woods, where everything appears deceptively serene.

We should get to the house, I’m thinking. Locate the others.

My eyes find Adria’s. “Time to dig out that cell phone, boss.”

Find Darcy’s Books on Kindle and Barnes and Noble
Visit Darcy at her website.

Sample Sunday: Dig, dig, dig until you find the truth. →