← The Making of a Psychopath – The Greatest Thrill Seeker of All

Embrace The Dark: My Author Playlist →

Thanks For The Great Books Blog Hop!

Happy Sunday, everyone! I’m very excited to be taking part in a the latest blog hop from the WG2E Street Team. Nine authors have new releases and to celebrate, we’re showcasing our new books at the Beach Book Blast website and at our sister site at the RG2E. There’s something for everyone–from Romantic Suspense, to Holiday romance, to YA Dystopian, and mysteries. To make the event even more fun, we’ve added a blog hop where readers can connect to their favorite authors and learn what great books, characters, or authors have inspired them.

What’s my inspiration as a writer?

I  was in high school when I read Anne Rice’s Vampire Chronicles, and I remember being completely swept up in the world she created. Not just the vampire lore she built nearly from scratch, but the worlds she took us to and the emotional roller coaster she put her readers on. I remember thinking if I could ever do half as good a job at telling a story as Anne Rice did with the Vampire Chronicles, I’d be a successful writer.

I don’t write paranormal–I write suspense and thrillers, but I still want to elicit that same bone-chilling, heart pounding joy ride Anne Rice inspired in me. I want readers to feel as though they are in the moment, as if they’ve stepped into my pages, wherever I’ve taken them. I’m sure I’m nowhere near her level, but it’s what I aspire to every time I sit down to work.

I’m so thankful to have picked up those books, to authors like Anne Rice, Stephen King, Thomas Harris, Alice Walker, and so many more who have given us such amazing books to learn from.

Here’s an exclusive sneak peek from my debut suspense novel, INTO THE DARK. 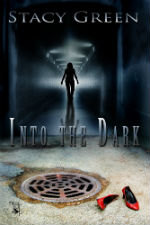 There was a miniscule, dark gray stain on one of the older tiles. On Emilie’s second day as branch manager, she’d dropped an entire cartridge of ink and splattered the black goo everywhere. Only the tiny spot remained. She had joked the hallway was cursed for her and vowed never to make a trip to the storage room again. The old basement had always given her the heebie-jeebies.

She put one foot on the stairs. Her brain demanded she turn around, but Emilie plunged forward. The storage room door was locked. She stuck her key in and turned it. The door pushed open with a creak. Emilie stared into the dark room.

Dizziness. Sweat beading on her forehead. Her stomach churned the way it had when she was a kid and played on the swings. Deep breath, force the fear away.

Emilie slid along the wall and flicked on the light. The room had been reorganized and some of the old junk taken out. In the far corner, the door waited.

She didn’t realize she’d crossed the space until she was standing in front of the door. She ran her hands along the faded wood.

“Ouch.” A splinter dug into her finger.

A padlock had been fitted over the rusted latch. Jeremy planned on having the door removed and the tunnel sealed once police gave him permission. But for now all that stood between Emilie and the Taker’s escape route was a piece of metal purchased at a local hardware store.

An imperfection in the aged wood caught her attention. Emilie knelt down. The bottom third of the door had a small knothole.

She dug in her bag until she found her phone. She dropped it.

“Goddamnit, get a grip and get it over with.”

Emilie picked up the phone and shined its light into the hole. She peered into the tunnel. She saw dirt, wooden posts, and more darkness. A crab spider scuttled across the ground, startled by the phone’s light.

This was the fate the Taker had meant for her—to drag her through that rotten hole for God only knew what purpose. Sick of the torment, she slammed her hand against the door. What had she done in those ten minutes of conversation at the Bellagio to set the Taker off? What right did he have to snatch her away?

INTO THE DARK releases November 30th from MuseItUp Publishing.
PreOrder here.
Get the print version from Amazon.

I’m giving away a copy of my short story, Welcome To Las Vegas, which takes you into the dark storm drains beneath Las Vegas and sets the tone for INTO THE DARK’s creepy underworld. Three winners will be randomly drawn from everyone who comments below.

And make sure to visit the Beach Book Blast website to enter the drawing for the $25 and $10 Olive Garden gift certificates, or click below to visit another Beach Blast author’s blog.

5 comments on… “Thanks For The Great Books Blog Hop!”

← The Making of a Psychopath – The Greatest Thrill Seeker of All

Embrace The Dark: My Author Playlist →