It’s early Monday morning, and I didn’t have my post for today planned. But there’s a question that’s been rattling around in my head. If you could have one hour with ANY fictional literary character, who would it be, and why?

So why Lestat? I’ve always been a reader. The earliest books I remember enjoying are Little House on the Prairie, Nancy Drew, and Trixie Beldon. I read them over and over again, along with several other books growing up. But then, when I was around fifteen, I read Anne Rice’s Interview With A Vampire and fell in love. Not with the narrative character Louis, but with the rogue fiend, Lestat. After that, I read the two books that changed my literary life: The Vampire Lestat and Queen of the Damned.

Anne Rice has said Lestat was inspired by her late husband, the poet and artist Stan Rice, sharing his blond hair and November 7 birth date. In 2003, Rice said character had also taken on some of her own attributes, stating “Stan was Lestat; he was the inspiration. Perhaps it is best to say Lestat was Stan and me. He was Stan and what Stan taught me. Lestat was inspired by Stan, and then I became Lestat.” (Wikipedia) 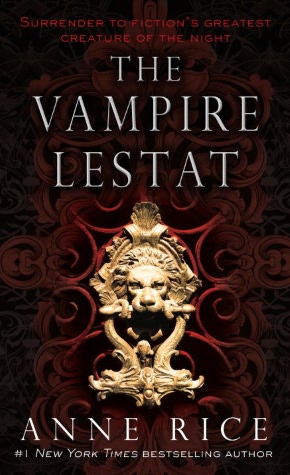 What a world Anne Rice created! She took us back to 18th century Paris, with the stinking above ground cemeteries, before the graves were removed into the quarry. She showed us ancient Rome and Egypt with such vivid imagery I felt as though I living history. And it was all done through the eyes of Lestat, the “Brat Prince,” as he’s called by his vampire peers. Bold, enthusiastic, intense, fearful, impulsive, brilliant, musical – any one of these adjectives can be used to describe Lestat. He’s the first character I remember reading who was so three dimensional, written with such emotional depth, that I grew emotionally invested. My heart worried for Lestat with each page, and I felt his pain and triumph as he galavanted through the centuries.

Reading Anne Rice’s novels – The Vampire Lestat in particular – was the first time I felt the need to write. The first time I was moved to write. And I did. All drivel about life and love and teenage angst, but Lestat was so real in my eyes, thanks to the stellar writing of Rice, I wanted to create a character that moved me just as much.

Twenty years later, I’m still not as good as Rice. I love my characters and strive to make them three dimensional, but I’m still learning. And I can say without hesitation that had it not been for Rice and the Brat Prince, I never would have realized my desire to write.

So I ask you: if you could have one hour with ANY fictional literary character, who would it be, and why?