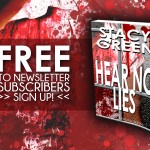 I know it’s been a while since I’ve posted, but I come bearing gifts! I’ve been working on not on but TWO Lucy Kendall books. GONE TO DIE (Lucy Kendall #3) will release in June, but I’ve got a surprise! I’m writing Lucy Kendall serial novella for mailing list subscribers! HEAR NO LIES takes place a … Read the rest →
2 comments

Confessions of a Thriller Author: Kids and Cop Shows

|   Stacy
I know it’s been a while since I posted, and I’m sorry for that. I’ve been sweating bullets trying to finish GONE TO DIE (Lucy Kendall #3), and we’re on track for a May release. Some of you may have seen my posts on my Facebook Author Page about how Grace loves watching Cops with … Read the rest →
Leave a comment

Confessions of a Thriller Author: My characters, my voice

|   Stacy
First off, let me say I cannot believe January is almost over. Time goes way too fast, and I am already behind for the year. Now, for today’s topic. ALL GOOD DEEDS was chosen as the January Book of the Month for the Goodreads group Psychological Thrillers. It’s a large group, and the members loved … Read the rest →
Leave a comment

Confessions of a Thriller Author: Writing the Kill Scene

|   Stacy
I hope everyone had a great Christmas! I received two great gifts. First, ALL GOOD DEEDS (Lucy Kendall #1) is the January Book of the Month for a major thrillers group on Goodreads. Very excited about that! My second gift isn’t just for myself – it’s for all of us! SEE THEM RUN (Lucy Kendall … Read the rest →
Leave a comment

Confessions of a Thriller Author: Pick Your Poison

|   Stacy
Most mystery and thriller writers joke about their search history, but we’re really telling the truth. In the wrong hands, every one of us would look like psychopaths plotting our next murder. Lucy Kendall is my very own serial killer, and she doesn’t like getting her hands dirty. After all, she still believes she’s killing … Read the rest →
Leave a comment 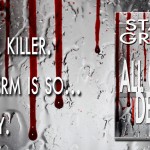 In my new thriller ALL GOOD DEEDS, former Child Protective Services worker turned private investigator and vigilante killer of pedophiles Lucy Kendall states very clearly that pedophiles can’t be cured. She bases her opinion on 10 years with CPS and seeing countless repeat offenders, as well as national statistics. Lucy, as so many of our … Read the rest →
1 comment
⇧