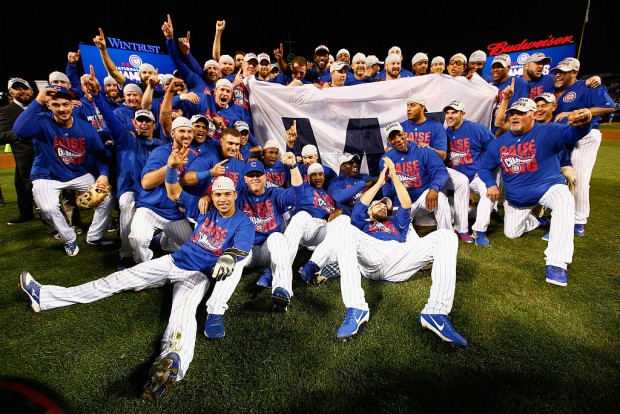 On Saturday night, the Chicago Cubs made history, breaking their so-called curse and making their first World Series since 1945. It all happened at Wrigley Field, where generations of faithful gathered to celebrate. These Cubs are young and hungry, and as potential league MVP Kris Bryant said, too young to care about curses.

But what about cracking under pressure? Cubs fans have seen it happen before. In 2003, we watched a more experienced team, with an all-star pitching staff, come apart after a crazy inning when a fan interfered with a play. Those Cubs lost their composure, their lead in the series, and eventually the NLCS. This year’s team is made of young, hungry guys who are mostly between 22-28, with the exception of catcher David Ross. He’s 39, and they call him Grandpa. Awesome, right? How could these young, relatively inexperienced guys handle such an enormous task?

This team started the season with great expectations by the fans, the media, the organization, and themselves. Four games into the season, one of their powerhouses tore his ACL and LCL. Many fans were doom and gloom. But the players held steady and went on to a 103 win season. Then came the postseason. They went into the NLCS the favorites, but ended up down 2-1 when their hitters were shut out for two games. Talk about pressure. An entire city and worldwide legion of fans has put their hopes on you, not to mention the bosses who hired you to produce glory.

Kris Bryant and Anthony Rizzo, both MVP candidates, couldn’t hit a damn thing. Rizzo was something like 0 for 10, and it was getting scary. I had major doubts, in part because these guys are so young. The millennial generation (and those who came after) aren’t known for toughness. They’ve grown up in a different time, with a shift in education that in some cases makes it easier to be average and put out average effort. They’re among the “everyone’s a winner and gets a ribbon” generations, and many of those people have a hard time in college and the real world because they’ve never learned how to fail.

Rizzo’s a cancer survivor, so it’s no surprise he broke it open in game four and led the Cubs to major victory. But the other young guys stepped it up to. Even though Bryant’s bat remained cool, he earned walks and got on base. Javier Baez and Addison Russell, who both look like they should still be in high school, brought their bats and incredible outfield skills. Game 5 was more of the same.

Anthony Rizzo made the national news when a mic caught him apologizing to the umpire for his actions the prior inning when he thought he’d walked but had a strike called (I didn’t think he was disrespectful, and neither did the umpire, it seemed). Parents shared the video across Facebook as an inspiration to their kids.

And then came game 6 in Chicago on Saturday night. A team on the cusp of history. 300,000 fans waiting OUTSIDE Wrigley Field to celebrate, plus the lucky ones with tickets ready to watch the game. A Cubs pitcher on the mound with a hell of a task on his shoulders, including going against a 3-time Cy Young Award winner and the man who shut the Cubs out in game 2.

Starting pitcher Kyle Hendricks never wavered, never cracked under the pressure. Never faltered when his team earned an error. The crowd booed when he was relieved in the 7th because he was still in full control.

The hitters brought their bats, and the Cubs prevailed. Celebration ensued, with quite a few tears among the faithful. But of all their accomplishments this season, what’s impressed me most about this young team is their poise and grace. They’ve made their share of mistakes, but they learned from them and pushed forward instead of cracking. When times were rough and they weren’t performing to their (and millions of others) expectations, they didn’t crack or whine or call foul. They worked harder and came out of their slump. And they didn’t allow the Cubs sad history to affect them, especially manager Joe Maddon, who no doubt played a big role in cultivating talent and managing egos.

Kris Bryant said they were too young to worry about curses. Perhaps, but they defied a generational stereotype this season, showing young people how to play hard, work hard, and be humble. They showed our youth how to be grateful for their accomplishments and the importance of teamwork. They’ve inspired a whole new generations of fans by being great role models, and as a parent, I’m forever grateful.