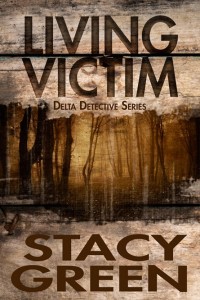 It’s finally here! Living Victim, the first Cage Foster/Delta Detectives Novella, is available NOW! Click on the picture to go to the book’s buy page. Now, onto the post!

So if you haven’t guessed by my various social media feeds, I have an interest in all things law enforcement. It takes a special kind of person to be a police officer, and while there are always going to be people who take advantage of the situation, there are FAR MORE good guys who put their lives on the line day in and day out. I can’t imagine being brave enough to walk away from my family knowing I might not come back (and this goes for firefighters, the military, etc).

Until last fall, most of my knowledge of law enforcement came from true crime and a lot of online research. One of the main reasons I’d chosen NOT to take the character of Cage Foster any further was because I believed I just didn’t know enough or have enough connections to make his police work authentic. That all changed in September when I attended the Writer’s Police Academy. I met real cops, firemen, deputies, secret service agents, undercover cops – the list goes on. I learned more than I ever dreamed about procedure, but also about their mindset and character, which is much more interesting to me. I also learned a lot about being a medical examiner, which is going to come in handy very soon, but more on that later.

I was lucky enough to go on a ride-along with a Sheriff’s Deputy, and that night was a game changer for me. I learned that southern hospitality is very real, and I got to witness firsthand how police deal with death. Our main call was a suicide, and the boy was found by his parents. When we arrived (lights blaring), my deputy and his sergeant rushed into the house, only to return a few minutes later. Their hunched shoulders and holstered guns made it clear the self-inflicted gunshot wound did its job.

I spent several hours watching officers work the scene, but the part that sticks out in my mind is the deputy who brought out the deceased boy’s pet cats. They were in separate carriers, and he put them all in a circle facing each other so they wouldn’t be as upset. And then he offered me half his snack and a water. Watching the process was sobering, and I stayed in the cruiser out of respect for the family, but I learned so much by just observing. Speaking with the deputy afterwards gave me precious insight on how these officers deal with things the rest of us can only imagine. And every bit of that was fodder for my character.

Suddenly I realized I could do this if I wanted to. I’m not interested in writing a nitty gritty police procedural, but I wanted to bring Cage back to life. I wanted to show his struggles as a Criminal Investigator while juggling family and personal life. I wanted to explore him constantly walking the thin blue line, because those are the things about law enforcement that really interest me.

So Cage is back, and I have to say, I am so damned happy about it. I worried that after writing so much darkness with Lucy Kendall I’d struggle to find Cage’s voice, but he was there instantly, with so many stories to tell I realized I had a series on my hands. The Delta Detective Novellas show Cage as cop and a human being, struggling to do the right thing when his professional and personal lives entwine. They also introduce some new characters, and you’ll be seeing a lot more of those characters in the fall!

First up is Living Victim, followed by Dead Wrong. Three more novellas will be released in February and March, and if you sign up for my newsletter, you’ll get an exclusive serial novella featuring Summer Jordan. Inspired by the medical examiner I met at WPA and my experiences with the Deputy State ME of Mississippi, Summer is an exciting new character who will be getting her own series in the fall. Signing up for the newsletter means you get to read her novella for FREE.

In the meantime, check out this EXCLUSIVE TEASER of Cage in Living Victim:

Cage threaded his way through thick underbrush, careful to avoid the thorn bushes. A throng of willow trees bordered the property. He smiled, thinking of the giant willow in his parents’ yard. He and his sister Lana used to play house beneath it, using the thin, whip-like branches as doors and walls. But these willows were so overgrown they looked like a mutated wall of green, branches of one tree entwined with the overgrown branches of the next. They provided a macabre sort of border, as if protecting Mark’s hoarding from the county outliers.

Red flashed between the tangled masses of green. A tent, Cage realized. Set up in the middle of the wild forest. His hand drifted to his gun. The daughter said a barbed wire fence bordered the property. Unless the foliage had taken it over as well, Cage saw no sign of it. The tent was on the property.

He edged closer. The adrenaline started in his fingertips, a tingling that shot up his arms and into his chest. The air thickened, the breeze slowed, as if the trees themselves knew Cage was trying to keep quiet. He touched his shoulder mic.

“McKay, request backup. Found a tent in the woods just northeast of the house.”

He approached slowly, the dry grass crunching beneath his feet. A bramble tugged at his uniform. He jerked his arm away just in time to keep from snagging his skin and leaving unnecessary blood evidence. The tent was fairly small, maybe eight by eight. More five-gallon buckets like the one in the house were placed haphazardly around the campsite. The shifting wind brought the smell of feces and urine mixed with a much headier scent Cage couldn’t place.

A small fire pit was dug into the ground, with a rudimentary grill and a few iron skillets off to the side. Next to the tent sat a black, plastic toolbox with wheels. While the outside of the tent was marred with dirt and streaked with a dark, dried liquid, the toolbox was pristine, as if it had been recently wiped down.

Ice dripped down Cage’s spine as fresh sweat broke out across his forehead, dampening the roots of his recently trimmed hair. He wiped his sweaty palms against his pant leg.

Withdrawing his gun, he edged closer to the site. “This is Investigator Cage Foster with the Adams County Sheriff’s Office. Like to have a word with you.”