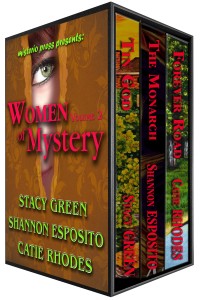 Here’s a slew of female sleuths for gifting to your favorite mystery reader or to yourself. Three fast-paced novels with edge-of-your-seat suspense for the price of one book!

In Stacy Green’s TIN GOD, Jaymee Ballard’s search for the daughter she was coerced into giving up sets her on a collision course with her late best friend’s widower, Nick Samuels. After receiving an anonymous note that reads I just murdered your wife… again, Nick returns to Jaymee’s hometown to find his wife’s killer, who has taken a second victim. When Jaymee and Nick eventually join forces to expose the truth, they discover it doesn’t always set you free.

In Shannon Esposito’s THE MONARCH, Anne Serafini is trying for a fresh start on beautiful Anna Maria Island, but she soon finds that Fate has once again placed her in the wrong place at the right time. With murdered young women washing ashore, she must try to stop a budding serial killer, and foil a family curse that says she will die before her twenty-eighth birthday–just three weeks away.

In Catie Rhodes’ FOREVER ROAD, Peri Jean Mace sees ghosts, and she’s never been particularly happy about it. Now she’s dealing with the debt collector from hell, literally. Her cousin got herself killed the same day Peri promised to do her a favor. Now her ghost wants justice, and an obnoxiously hot cop wants to arrest Peri’s best friend for the murder. None of this can turn out good.

These books are all designed to be enjoyed as stand-alones, even though some are part of a series.