On May 12, 2007, the peaceful quiet of Lancaster County, Pennsylvania was shattered. Sound asleep in her two-story home on Peach Lane, twenty-year-old Bucknell University student Maggie Haines woke up to the sounds of a frantic struggle in her home. She got out of bed in search of the commotion, going first to her parents bedroom wehre she found her father lying on the bed. Her mother sat on the edge, badly injured.

“Go get help,” Lisa Haines managed to say. Maggie raced out of the house so quickly she didn’t see her brother’s mutilated body lying in the hallway. Help would be too late. Thomas Haines, 50, Lisa Haines, 47, and Kevin Haines, 16, died of multiple stab wounds. Only Maggie was spared without a scratch on her. 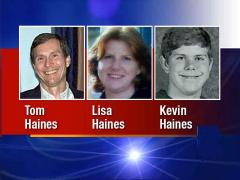 Seventy miles from Philadelphia, Lancaster County is known as Dutch Country, complete with beautiful rolling hills and dotted with Amish carriages, a place where people trusted one another and often didn’t lock their doors. The Haines were no exception. The back door stood open and police found no signs of forced entry. Nothing was stolen from the home. Maggie saw no one in her mad dash through the house and across the yard to the neighbors.

Weeks of investigation proved what everyone already knew: the Haines were happy family who loved one another and had no dark secrets. Suspects popped up here and there, but all were false leads or disturbed people looking for attention.

While Maggie was originally a suspect because of her strange calm during questioning and lack of injury, she was quickly ruled out. The killer, wearing a size 10 hush puppy shoe, had left blood prints on the carpet. When Maggie went to the neighbors, she didn’t have a drop of blood on her.

The community was terrified. The county coroner suggested a psychotic killer may be on the loose. The FBI was called in, and while the Haines murders were similar to a string of other home invasions across the country, no evidence was found to tie them together.

Sixteen-year-old Kevin Haines sustained the worst injuries by far. In addition to defensive wounds, his neck and upper body were eviscerated. The FBI questioned Kevin’s friends and classmates, but found nothing about the shy sophomore that would lead to murder. He had a small circle of friends and was among the top academics in his class. Close with his family and well respected, there were no skeletons in Kevin’s closet.

For more than a month, Lancaster residents were baffled and broken. They believed a transient killer had entered their town and chosen his victims at random. And he could come back at any time. Befuddled, the policed urged residents to follow procedures such as “locking their doors at night, turning on lights, knowing where their children are during the day, meeting with neighbors to be sure that they know each other’s daily routines.”

Just when it appeared the killer had gotten away with it, the unthinkable happened. After being admitted to a mental hospital following a suicide attempt, sixteen-year-old Alec Kreider, described by many as a close friend of Kevin’s, confessed to the murder. His parents didn’t believe him at first. How could their highly intelligent, quiet son do something so horrendous? But when his father saw the evidence, including the bloody knife Alec had hidden in his closet, he contacted police. They’d already received two tips about Kreider, one going so far as saying the teen bragged about getting away with murder. The forensic evidence supported Kreiders story: the blood on the knife matched Kevin Haines’s and the size ten hush puppies Alec wore to the mental facility still had traces of Kevin’s blood in the soles.

A police affidavit stated that Kreider went to the home intending to smother Kevin, but instead stabbed him in the neck and chest, and then went on to kill Thomas and Lisa. Kreider was charged as an adult with three counts of murder. Police had interviewed Alec but dismissed him early on. After the murders, he continued to go to school and lead a normal life.

District Attorney Craig Stedman says that while many students found Kreider “dark,” “cynical” or “arrogant,” and at least one harbored the suspicion that he might someday “do a Columbine,” no one saw any clear sign that he was on the verge of a murderous frenzy. “But if someone would have had access to all of the surveys together,” says Stedman, “what he ended up doing would not have been a great surprise.”  SOURCE

Perhaps the most compelling–and disturbing–look into Kreider’s mind is the journal he began keeping. Described by PEOPLE as “grandiose, pathetic and chilling,” Kreider made a chilling entry on the night of the murders, stating he had been born that very night. He also states his “want/need to kill people had increased.” There is no remorse anywhere in the writing.

“I don’t know if God wanted me to hate so much but things have been very hateful lately.” –Alec Kreider journal entry.

One passage in the journal is particularly telling. Kreider wrote of hating happy people. “They make me sick.” His own parents were divorced, and the Haines home, a place he visited frequently, was brimming with happiness thanks to a close-kit family.

But to this day, Alec Kreider has never given a reason. Nor has his shown an ounce of remorse for his friend and the family he destroyed. He was sentenced to three consecutive life sentences and has no possibility of parole.

And the reason Maggie’s life was spared? Kreider didn’t realize she was home from college.

What do you think? Are some people just inherently evil? Were the warning signs all there? Should Kreider have received the death penalty?